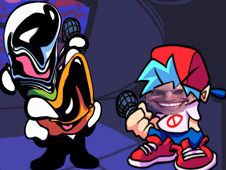 What is FNF but Funni: Week 2?

As you can see right at this moment, our series of FNF funny games is still going strong, and we return right now with such a game for you all, the game is called FNF but Funni: Week 2, where you and Boyfriend are once again facing off against the Spooky Kids, but this time there will be all sorts of random events, funny things, and memes happening all the time, making this a funny version of the original week!

Defeat the Spooky Kids while getting amused at the same time!

In this Week 2 mod re-imagining, you can play in either the story mode or free play mode, with the goal being the same in both, which is to reach the end of the songs and have the progress bar be in your favor, hitting the notes of the songs so well that you win.

To do so, when arrow symbols above BF match with one another you have to match them by pressing the same arrow key. Be careful not to press different keys or get the timing wrong too many times in a row, or you lose the game. Have fun, and funny!