FNF A Spooky One Shot 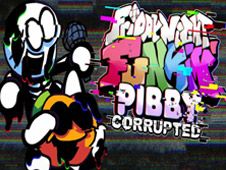 What is FNF X Pibby vs Spooky Kids & Monster?

Even the Spooky Kids and Monster now have the Pibby virus of FNF, so get them rid of it so that they aren't extra scary, something that you can only do by helping Boyfriend defeat them in a rhythm battle, something you do through five awesome tracks:

You will choose between the story mode and free play mode from the main menu, after which you need to give your best to reach the end of the songs by hitting your notes according to the charts, in either case.

To do it, when you see arrow symbols match above BF's head, that is when you need to press the identical arrow keys. Be careful not to miss hitting them too many times in a row, or you end up losing and having to start again from scratch. Enjoy!