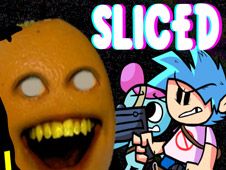 What is FNF x Pibby Vs Annoying Orange?

Even the Annoying Orange of the internet has gotten the Pibby virus, so you now have to get rid of it by defeating it through the song called 'Slice'!

Let's defeat the Pibby Annoying Orange, more annoying than ever!

Watch as arrow symbols match above BF's head, and when they do, press the identical arrow keys to hit your notes, at the same time. If you keep doing it until the song's conclusion, winning is achieved, but if you miss hitting the notes too many times in a row, you lose. Good luck, enjoy!