FNF with Twilight Sparkle and Mordecai 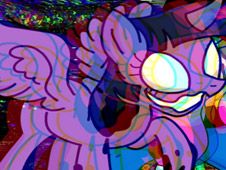 What is FNF vs Pibby Twilight Sparkle – Dusk Till Dawn?

Even Twilight Sparkle from MLP could not escape the Pibby virus from FNF, which is why we now invite you to help BF cure her of it by defeating her in a rhythm battle on the song called 'Dusk Till Dawn'.

BF Vs Pibby Twilight Sparkle, a musical battle from Dusk Till Dawn!

To win you need to reach the end of the song, and to accomplish that you need to keep hitting your notes until its conclusion. This means that when arrow symbols are floating above BF, you press the identical arrow keys. If you instead miss hitting the notes multiple times in a row, you have to start again from scratch, so focus and win instead!