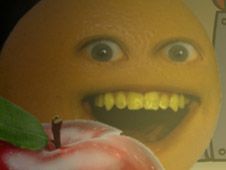 What is Friday Night Funkin’: Vs Annoying Orange?

Annoying Orange is back in the world of FNF Games right now and here, something for which you should definitely be very excited, as this is a classic meme character we can never have enough of, and you will now duel against it on one song called 'Not-a-Knife'!

When you see floating arrow symbols match above BF's head, on the right, that is when you need to press identical arrow keys to hit your notes, doing it until the song concludes to win, but be careful not to miss your notes too many times in a row, you will lose and have to start again from scratch. Enjoy!