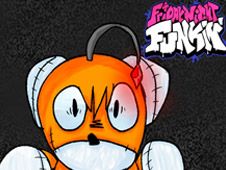 What is Friday Night Funkin’: Vs Tails Doll?

Tails from the Sonic series, and the best friend of the title protagonist, is back in our category of FNF Games online, but, this time, it is back as a doll, instead of its regular furry self, which is why we knew that the mod had to be added for you as soon as possible, even more so since it has the following awesome songs:

Defeat the doll of Tails to show off your rhythm!

You get to play this game in either the story mode or the free play mode, and in the story one, you can also pick a level of difficulty you think you are more comfortable with.

In either case, give it your best to play all the notes of the songs according to the charts, reaching the end of the songs in order to win the music battle, simple as that.

This is done by pressing the arrow keys at the same time as the same arrow symbols above BF's head match one another, but know that if you miss doing it too much, you eventually lose.

Good luck we wish you all, and all the best with this and any other games with FNF you will play here!