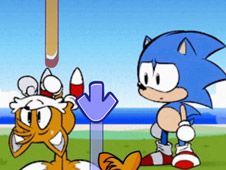 What is FNF Friends from the Future: Ordinary Sonic vs Tails?

A new battle of rhythm between Sonic and Tails is here, only with the FNF Friends from the Future mod, where the two friends will now do battle on two awesome custom tracks:

Sonic Vs Tails, and Ordinary FNF battle with friends from the future!

Whether in the story mode or free play mode, no matter how you choose to play, win by reaching the end of the songs. How? It happens if you hit your notes according to the charts.

To do that, when you see arrow symbols float and match above your character's head, that is when you press the identical arrow keys. Don't miss one too many times, or you lose. Enjoy!