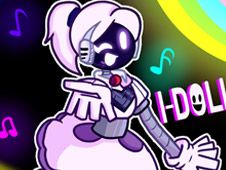 What is Friday Night Funkin Vs I-Doll?

Only on Play-Games do you have the chance to find new Friday Night Funkin mods that you can't find and play anywhere else, just like we are proving to you all right at this moment when you are invited to play Friday Night Funkin Vs I-Doll! I-Doll is a robot doll who looks just like an idol from Japan and the many anime series featuring them, making her one of the cutest robots in this series.

After taking note of Boyfriend's rise in popularity in the music world, she invited him to her concert, where they will now duel in a battle of rhythm on the songs from Week 1.

How to play Friday Night Funkin Vs I-Doll:

To defeat the singing robot doll you need to reach the end of the songs with the progress bar in your favor, and you can do it in either the story mode or the free play mode. The level of difficulty is up to your choosing, so pick the one you think is suited for you.

To play the notes of the songs at the right time you use the arrow keys, which you press when the same arrows match above BF's head, not one moment sooner or later so that you sing correctly.

Missing to sing or play too many notes one after another means that you will eventually lose, so don't let that happen, because we hope that you focus and win, having the most fun possible!