FNF Tails Gets Trolled: The Conclusion 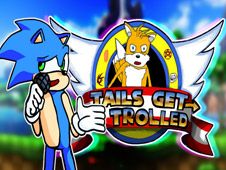 Boyfriend now has two face off against comical versions of Sonic and Tails, who have been made fools of by trolls, and in this new updated mod, in addition to bringing Sonic along, we've also got two more songs, for a total of three awesome ones:

Troll Sonic and Tails with your rhythm skills!

After choosing between the story mode and free play mode, give it your best to reach the end of the songs by playing all their notes according to the charts, since that is how you achieve victory.

How do you do it? Well, you watch for when arrow symbols above BF match one another and press the identical arrow keys at the same time. Don't miss doing it countless times in a row, or you lose the whole game.

We wish you all the best and hope to see you around some more, it would be a shame not to see you keep playing our great games of the day, especially with Friday Night Funkin!