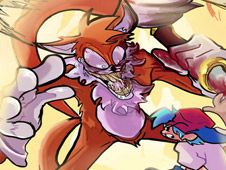 What is Friday Night Funkin’ vs Tails Secret Histories?

It seems that Boyfriend found the Secret Histories of Tails, which are not that good, so he got mad and now the two of them are having the most intense rap battle in the world of FNF, with you now being invited to take part and win it, on all the following songs:

After you've made your choice between the story mode and free play mode, give it your best to reach the end of the songs in either case, which is how you achieve victory. So, when arrow symbols float and match above BF, that is when you need to press the identical arrow keys, and you need to keep at it until the end.

Be careful not to miss hitting the notes multiple times in a row, since that will lead to you losing and having to start again from scratch. We wish you all the best, and definitely invite you to keep having fun with our amazing daily content!