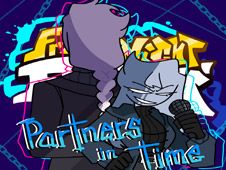 What is FNF Partners In Time – vs Selever & Rasazy Family?

Members of the Selever & Rasazy Family are the new FNF Mid-Fight Masses antagonists that you and Boyfriend have to go up against in a rhythm battle right now, something you do on four awesome tracks:

Help BF defeat the partners in time of MFM!

Whether you are playing in the story mode or free play mode, winning is achieved in the same way, by reaching the end of the songs and to do that you need to hit your notes according to the charts. To do that, press arrow keys at the same time as the identical arrow symbols match above BF's head.

If you miss hitting the notes multiple times in a row, you lose, so focus on not letting it happen. Good luck, enjoy!