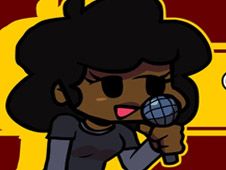 What is Friday Night Funkin Vs Carol V2?

We continue with our series of new Friday Night Funkin mods online today as well, as we know for a fact how much kids and adults alike want to play new games in this highly popular series from Newgrounds, and this latest such game you get to enjoy here is called Friday Night Funkin Vs Carol V2, it being a mod featuring a new character for our website called Carol.

Carol is a character that was modded in order to replace Daddy Dearest from the original game, with her having been a replacement for Girlfriend as well at one time, and her three custom songs are called Carol Roll, Body, and Boogie. She's a dark-skin girl with black eyes and brown hair, who wears a combo of a long-sleeved shirt underneath a t-shirt, a pair of blue shorts, knee-length socks, and some grey and white sneakers.

If you get to the right spots, you can see a secret dialogue of her where she makes fun of Boyfriend for being short, and she cameos in some other mods in the series, such as the one with Hatsune Miku, which we definitely invite you to check out after this game!

Face off with Carol in a song battle!

As a boyfriend you have to win song battles against Carol in order to impress your Girlfriend and to do so you will have to press the arrow keys at the right moment to hit all the notes, until the bar turns fully green, and not red, since that is when Carol wins. Go through the story mode, or just play the song battles in the Free Play mode. Good luck, and we hope to see you play more of these games, if this one was your first in the series!