Friday Night Funkin’ VS Minus SKY 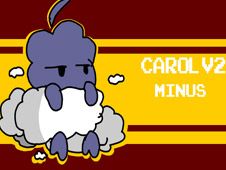 What is Friday Night Funkin Carol V2 Minus?

Carol from FNF Games has been one of the series' most popular characters, and while she already had not one, but two games where she was featured in this category, we are very happy that she is returning right now for the third time, and it is in the awesome new mod called Friday Night Funkin Carol V2 Minus.

Can you beat Minus Carol in a rhythm battle, just like with the original?

If you are a long-time fan of the FNF Games series, you know that the Minus mod is a mod where the characters have been made to look like their icon versions, and while Carol was not featured in the original one, she is now available here, with you playing against her icon version, where she looks like a fluffy cloud, definitely one of the cutest antagonists you have encountered so far.