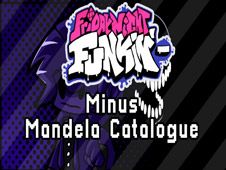 What is FNF vs Minus Mandela Catalogue?

The Mandela Catalogue mod from FNF is finally getting its own Minus remake, where the characters have been reduced to their icon versions and made to look like them, with other new stuff such as songs, variants, backgrounds, and effects, and more.

Try the Minus Mandela FNF mod for something extra!

In whichever mode you are facing off against the scary characters, winning is achieved by reaching the end of the songs and to do that you need to hit your notes according to the charts. This means pressing arrow keys at the same time as the identical arrow symbols match above BF, on the right.

If you miss doing it multiple times in a row, you lose and have to start again from scratch, something we hope does not happen, but instead, you win. Good luck, we wish you all the best and tons of fun!