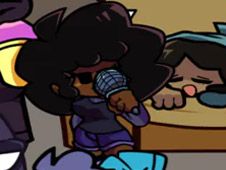 What is FNF vs Carol Birthday – Tuesday Birthday Night?

In FNF it's not just any Tuesday night, as it is Carol's Birthday, and while plenty of characters have shown up to this event, the most important one is BF, as she and he are now going to once again duke it out musically, on the song called 'Joyus'. Let the festivities begin!

Hit 'play' to start, and give it your best to reach the end of the songs by playing all their notes according to the charts, the only way to win, because if you miss hitting too many notes in a row, you lose and have to start again from scratch. To hit the notes you press arrow keys at the same time as the identical arrow symbols are matching above BF's head. Good luck, enjoy!