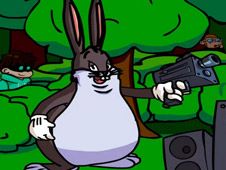 What is FNF vs Big Chungus?

Who is Big Chungus? Well, it is a meme, and it looks like a really fat Bugs Bunny, which is quite the sight, believe us, and the next antagonist that you will have to face off against in our category of FNF Games online, where right now we are happy to share with you this awesome new mod called FNF vs Big Chungus!

This funny mod contains a total of four original tracks for you:

Show off your rhythm skills against Big Chungus!

You can face this new antagonist in either the story mode or the free play mode, it's up to you, but in both of them you've got to give your best to reach the end of the songs, tapping the arrow keys at the same time as arrow symbols above BF match, and if you do that until the end, you win.

Of course, this also means you need to be careful not to press the keys wrong too many times in a row, because if that happens you lose and have to start all over again from scratch. Let the fun start now, and don't hesitate to tell your friends about our awesome games as well!

Which Avenger Are You
ADVERTISMENT