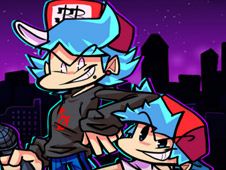 What is Friday Night Funkin vs Big Brother?

Did you know that BF had a big brother? Yes he does, and you can see how big of an influence he was since he might be taller than BF, but is still a blue-haired boy with a red cap on, so you can see where our protagonist got his style from. His Big Brother is back from college and he wants to see how good BF got at music, so they're about to have a friendly rap battle, one that you join in, and are doing it on the following songs:

A rhythm battle of family: Boyfriend Vs Big Brother!

You can choose to go up against this character in either the Story Mode or the Free Play mode, it is up to you, but no matter the case, your goal remains the same, which is reaching the end of the songs and turning the progress bar in your favor, since that is how you win.

To do that, press arrow keys at the same moment as the arrow symbols match above BF, since that is how you play the notes according to the charts, but be careful not to miss too many notes, or you lose the game. Good luck!