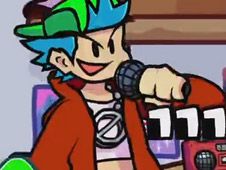 What is Friday Night Funkin’ vs Rapper Older Brother?

Boyfriend's family has always been musically inclined, which is the reason why his older brother is such a good rapper as he is, and now that he's back from his tour, he wants to challenge Boyfriend to show him who the best is, but for that reason, we invite you to play the role of BF and defeat Older Brother in a musical battle you're going to enjoy a great deal!

Take part in the best rap battle ever: Boyfriend Vs Older Brother!

What you have to do is very simple, and we will now explain to all those of you who are not used to the gameplay. When you see arrow symbols above BF are matched with one another, at the same time you have to press the same arrow key on the keyboard since that is how you hit all the notes and rap all the rhymes!

Know that if you miss doing that too many times in a row, you lose, but if not, and you keep the flow going until the end of the song, you are going to win. Now, choose between the Story Mode or Free Play mode, and start giving this game your all right now, having tons of fun as only here you can!