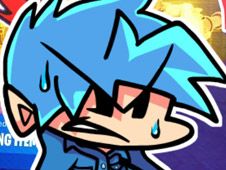 What is FNF vs Youngest Rapper?

FNF vs Youngest Rapper is a new mod based around YouTube clips, vidoes of really young kids doing rapping, and you and BF will face off against all of them right now on the following huge tracklist:

Help FNF's BF defeat the Youngest Rapper in the game!

After making your choice between the story mode and free play mode, in either case, give your best to reach the end of the songs by playing their notes according to the charts, which is how you win.

This means pressing arrow keys at the same time as the identical arrow symbols match above BF, but be careful not to miss doing it too many times in a row, you will lose. Good luck, and have fun!