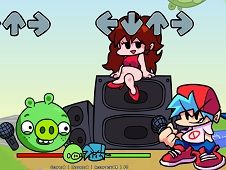 What is FNF Vs Bad Piggies?

Friday Night Funkin 'newest mode is now online on Play-Games.com, and this time you will have to fight rap rhythms against the famous green pigs, from the famous game Angry Birds (Bad Piggies).

Who are the Bad Piggies from FNF?

These piglets are the negative characters in a game of skill that managed to break many international records when we talk about the popularity of online games, because it was a game much loved by all players, whether we are talking about women, men, adults, people age or children. The goal of the game was quite simple, more precisely, you had to shoot a slingshot against the pigs that were barricaded in their house. The ammunition you had to use was made of birds (Angry Birds), which were three in number, and which you had to throw with millimeter precision so as to break into the piglets' house.

In the FNF game you will have to help Boyfriend to fight against the piglets, and the creators of the mode managed to create three other new, unique songs: