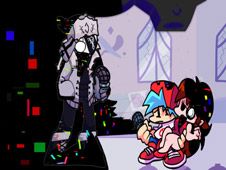 What is FNF X Pibby vs Corrupted Ruv?

Even Ruv has been Corrupted by Pibby, so help him overcome it by defeating him right now in a rhythm battle to the original track called 'Zavoglitch'!

Watch for when arrow symbols match above BF, and at the same time press the identical arrow keys to hit your notes. Be careful not to miss hitting the notes too many times in a row, or you lose. Reach the song's end to win, something we wish you good luck and all the best for!