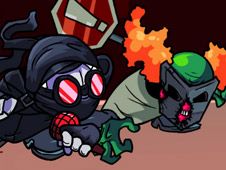 What is FNF: Hank sings Target?

FNF: Hank sings Target is a really interesting mod that manages to mash up three mods into one (Accelerant Hank, Executive Distortion, Madness Project), and this new song that he sings is bonkers, so you're in for quite a lot of fun!

Help BF win against this Madness Combat character by reaching the end of the song, something you do by playing your notes correctly according to the charts.

That is done by pressing arrow keys at the same time as the identical arrow symbols match above BF's head. Don't miss multiple notes in a row, or you lose and have to start again from scratch. We wish you all the best!