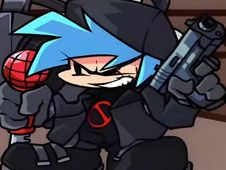 What is FNF: Hank Sings GunFight?

It's time for a new Boyfriend Vs Hank FNF battle, this time on the song called GunFight, once again in the desert of Nevada, with our team being confident that you are in for a lot of fun, as you always do with FNF x Madness Combat crossovers!

When the arrow symbols float and match above BF's head, at the same moment you need to press the identical arrow keys to hit your notes according to the charts, and if you keep doing it until the conclusion of the song, you will have won. If you miss hitting those notes too many times in a row, you lose and have to start again from scratch. Enjoy!