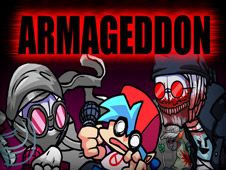 What is FNF vs White Hank sings Armageddon?

Boyfriend meets White Hank from Madness Combat in Nevada, and the two of them are now going to have a rhythm battle in the desert on a song called 'Armageddon', which we are sure you will love doing from start to finish, guaranteed!

BF Vs White Hank, the FNF musical Armageddon is here!

Reach the end of the song to win, something that you do by playing all your notes according to the charts until the conclusion when the progress bar will fully be towards you. Playing the notes is done by pressing arrow keys at the same time as the identical arrow symbols match above BF's head. If you miss doing it too many times in a row, you lose.