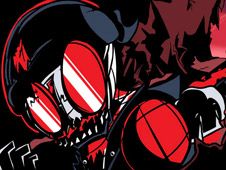 What is FNF vs Antipathy Hank?

It seems that Hank from Madness Combat is making his return into the world of FNF Games online right now and here, in the mod known as FNF vs Antipathy Hank, which features the character design attributed to this character from that episode of the series, and now that Boyfriend is in Nevada to battle this character, you will have to help our protagonist win on all the following songs:

Boyfriend Vs Anitpathy Hank, the rap battle that will shake the whole desert!

You can battle this assassin in either the story mode or free play mode, it's up to you, but in both cases, you have the same goal, which is reaching the end of the songs by playing all of its notes according to the charts, so use the arrow keys to press them at the same time as arrow symbols above BF match.

Be careful not to miss pressing the keys too many times in a row, since that means losing the game and having to start again from scratch, something we definitely don't wish for you, as we only wish you will win!