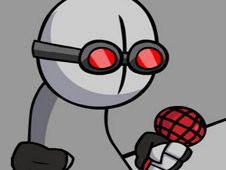 What is FNF VS Classic Hank?

Hank from Combat Madness is already a regular in our series of FNF Games online, where it seems that he has integrated himself quite nicely, and he is making his return right now and here when he has shown up as Classic Hank, the first iteration of this character, which you will now have to defeat on the following custom songs:

You can face this character in either the story mode or free play mode, it's totally up to you, with the goal being the same, which is to reach the end of the song, playing all of its notes according to the charts in order to win.

This means that you need to watch for when arrow symbols above BF's head match one another, and press the same ones yourself, all the way until the progress bar fills towards you.

Be careful not to miss pressing the keys too many times in a row, or you will eventually lose because of that, so be careful. Enjoy!