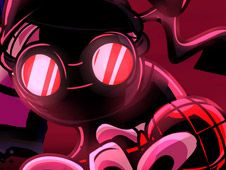 What is Friday Night Funkin vs Accelerant Hank?

Hank has had many forms over the years, and he now returns to our website in his Accelerant form, where he will battle Boyfriend not with his usual guns and weapons but with music, and they will do it in Nevada, where most of the Madness Combat series is set in. Accelerant Tricky and other characters from the series will make cameos.

Hit play, since the game only includes one song, and give it your best to reach its end by playing all of its notes, since that is how you achieve victory!

To do it, when you see arrow symbols above BF's head match with one another, you will have to press the same arrow keys on the keyboard, and keep doing it until the song ends.

Remember that if you miss pressing the keys too many times in a row, it leads to your loss and having to start again from scratch! Good luck, enjoy!