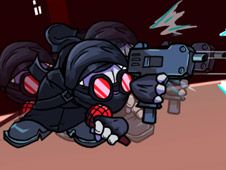 What is FNF vs Accelerant Hank, but he shoots 8X More Bullets?

Hank from Madness Combat Accelerant has always been a fearsome musical challenger for Boyfriend, even more so since he is always shooting bullets around, but today he shoots eight times more bullets, making the song harder for you to beat him on, which is what we invite you to try doing right now and here with our fresh new game!

To win, you still have to do the same thing, which is reaching the end of the song by playing all of its notes according to the charts, which you do by pressing arrow keys at the same time as the arrow symbols above BF match but don't miss too many notes in a row, or you lose.

To dodge the incoming bullets towards you, make sure you always hit the bullet notes, but avoid the hurt ones, which are black with red borders because they will make you lose if you hit them. Hellclown makes a special appearance if you play the game in the hard mode.

Good luck we wish you all, and we definitely hope to see you around here even more, where fun never stops happening!