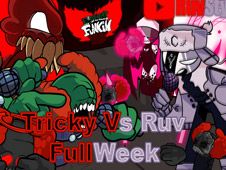 What is Friday Night Funkin’ Ruv Vs Tricky?

We love it when two antagonists can become enemies to one another, instead of dueling Boyfriend, just like it is happening today, when you will become Ruv from Mid-Fight Masses, and will have to give your best to defeat Tricky, the crazy and evil clown, without a doubt one of the most iconic FNF rivals, ever!

Ruv Vs Tricky, let's see who is better!

Well, you are going to use the arrow keys to hit the notes of the songs, so when you see the arrow symbols above Ruv match one another, press the same arrow keys yourself, and if you keep doing it until the end of the song, you become the winner.

Be careful not to miss pressing the keys too many times in a row, because if that happens, you lose the game and have to start again from scratch. Enjoy!