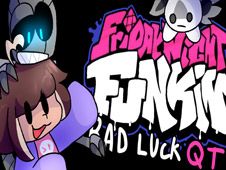 QT and KB are two characters that you've battled before in our category of FNF Games online, but we are very happy that they are making their return right now and here, as once again you get to fight off against them in rhythm battles, and you are also doing it on five brand new songs, so this should feel fresh even if you've played the first mod. The songs are:

Can you defeat the two musical robots?

If you think so, choose between the story mode and free play mode, pick a level of difficulty, and then give it your absolute best to reach the end of the songs by playing all their notes according to the charts, since that is how you achieve victory.

When arrow symbols floating around match above BF's head, that is when you have to press the same arrow keys, but know that if you miss doing it too many times in a row, you will lose. Enjoy!