FNF Elements Of Insanity vs My Little Pony Cupcakes

FNF Elements Of Insanity vs My Little Pony 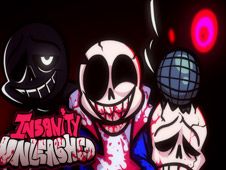 What is FNF Insanity Unleashed vs Insanity Sans?

Insane and unleashed versions of Sans from Undertale have now dropped into the world of FNF, and while this character might have appeared here before, never have you had to face off again him like this, where you have an extensive list of songs to battle on:

Insanity is Unleashed in this new FNF mod with Sans from Undertale!

After making your choice between playing in the story mode or free play mode, give your best to reach the end of the songs, either way, do so by playing your notes according to the charts. This means pressing arrow keys at the same time as the identical arrow symbols float and match above BF's head.

If you miss doing it too many times in a row, you need to start again from scratch, so be careful not to let that happen. Enjoy, good luck!