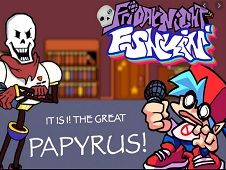 What is Great Papyrus and Sans?

Boyfriend and Girlfriend will be present this time together in a new way that we guide you to try. This time you will not have to conquer Girlfriend, but you will have to face the two skeletons: Sans and Papyrus.

Who are Papyrus and Sans?

Sans and Papyrus are two brothers who were known in the game Undertale and Snowdin Forest. The two brothers are similar to a skeleton but in humanoid form. As an appearance, the older brother, Papyrus has a red scarf around his neck, and boxing gloves and shoes are red, and on the other hand, Sans is wearing a blue jacket and purple shoes.

The characters are made in such a way that they look pixelated, just like in the old Nintendo games.

What songs do we find this way?

Songs: Down to the Bone, Rhythmic Scarf, Sanstastic Song;

Human, I, the great Papyrus, will capture you! And that includes your girl! So be prepared!

What? You don't wanna Fight?

You want to rap battle?

Be ready for my beautiful voice!

Use the arrows to dance as good as you can!