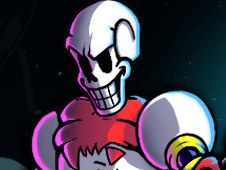 What is Friday Night Funkin vs The Great Papyrus?

The Great Papyrus from the world of Undertale is once again your musical foe in the world of FNF Games, but this time he gets his own dedicated mod, where you and BF need to face him on the following tracklist:

Have a battle against The Great Papyrus in FNF!

After making your choice between the story mode and free play mode, in either case, make sure you reach the end of the songs by playing their notes according to the charts, which is how you achieve victory, so when you see arrow symbols match above BF, press the identical arrow keys at the same time.

Make sure not to miss hitting your notes too many times in a row, because that will lead to you losing and having to start again from scratch. Good luck and the best we wish you all!