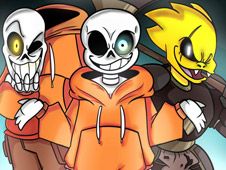 What is FNF: Distrusted vs Sans Papyrus and Alphys?

All the previous crossovers between FNF Games and Undertale have been incredibly well-received on our website, as the two fanbases seem to combine very nicely, so we are very interested in the fact that right now we could share with you a brand new mod like that, one where you get to go up against three characters from the series, shown in the title, on three original songs to love from start to finish:

From the main menu, you will pick between the story mode and free play mode, and then you will have to give your best to reach the end of the songs by playing all their notes according to the charts, winning once you've reached the end of said songs.

To do it, press arrow keys at the same time as arrow symbols above BF match one another, but be careful not to miss pressing the keys too many times in a row, since that will lead to you losing. Good luck, and have the best time possible, as always!