FNF vs Hex Reanimated with Lyrics 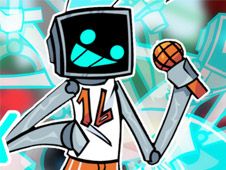 What is FNF vs Hex Reanimated with Lyrics?

Hex, the basketball player and part-time rapper who has a television instead of a head is one of the classic mod antagonists that we started this category off with, and we're very excited that he is making his return right now, when not only does he have lyrics to the custom songs, but he looks brand new, since he has been reanimated, and now has a new design and new moves to boot!

Help BF defeat the new Hex, and have fresh fun as only here is possible!

Custom songs included in this week are:

You are going to use the arrow keys to play the notes of the songs, so when you see arrow symbols matching above BF's head, you need to press the same arrows, and then you go according to the chart, and if you reach the end of the songs and the progress bar is in your favor, you've won.

Be careful not to hit the wrong keys at the wrong time, because if that happens too many times in a row, you lose the whole game, and have to start again from scratch. Good luck!