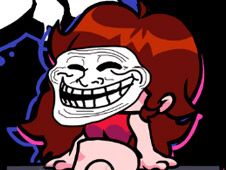 It seems that FNF Games with TrollFace are getting more and more popular in the past few days, and all sorts of awesome new versions have appeared out there, with our team, as always, being very dedicated to bringing you the best of them, just like it is going to happen right now with the addition of The Blueballs Incident (Trollge)!

Boyfriend Vs Trolls, a rhythm battle that is always fun!

It seems that somehow BF has ended up in the stickman meme universe of the Troll Faces, and so Derpina has sent her best agent on the job to banish him from their realm, and that is Agent Blueballs, the enemy that you need to help BF defeat in this awesome new rhythm battle, something that you do on the following four songs:

Use the arrow keys to hit the notes of the songs at the perfect times, but remember that not getting the timing wrong too many times in a row causes you to lose the game, so don't let that happen for anything in the world. If the progress bar has turned green, that is the moment where you've won. Good luck!