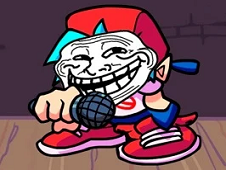 What is Friday Night Funkin': The Full Trollage?

The Full Trollage is the new Friday Night Funkin 'mode in which you will have to meet the most popular characters from the Troll series.

Who is Troll Face?

Troll Face is the most famous caricature, and with this image, most memes were made. Troll face memes are very popular in almost every online game, but they debuted in Minecraft. Most of the time, this meme means something strange, or you wouldn't have thought about it at first.
In the FNF game, the Troll Face character is embodied in a Stickman body, the body of this character is only sketched by some vertical lines that signify the hands, the body, and the legs, everything is minimized to the maximum.

In the game, you will have to defeat the main character at all levels of the game. Each week has a unique song, and the game was developed by Xentidoe.

use the arrows to dance as well as you can!