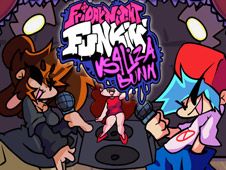 What is Friday Night Funkin vs AlizaBunn?

AlizaBunn is a bunny girl from FNF who kinds of resembles GF, and she is the latest antagonist that a redesigned BF has to face off against in a rhythm battle, something we are sure you will be having tons of fun with, especially since this full mod has all sorts of songs in it:

BF Vs AlizaBunn, Boyfriend Vs Bunny, only in FNF!

In either the story mode or free play mode, victory is reached in the same way, by playing all your notes according to the charts, winning once you've reached the song's conclusion and the progress bar is towards you.

To hit those notes you press arrow keys at the exact same time as the identical arrow symbols float and match above BF. If you miss hitting notes multiple times in a row, you have to start from scratch, so don't let that happen. Good luck!