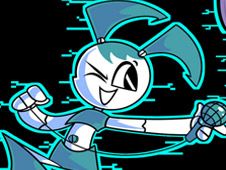 What is Friday Night Funkin: Vs. Jenny?

Jenny is a robot girl from Boyfriend's school, and after she challenged him in the hallways, there was nothing left for him to do other than to prove why he is the master of rhythm, and defeat her, something that you are here to help her out with in this awesome new FNF mod called Friday Night Funkin: Vs. Jenny, where you will have a music battle on a custom song called XJ!

You are going to use the arrow keys to play notes of the song in this kind of game, so when you see arrow symbols above BF's head match with one another, you have to press the same arrow keys at the same time, and you have to keep doing it until the end of the song to win, so don't miss pressing too many keys in a row, or you lose.

Now that you've learnt the basics of this game, we hope that you start giving it a chance right now, and have fun as it is possible only on our website!