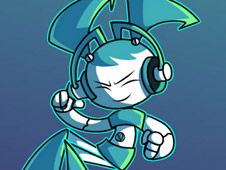 What is Friday Night Funkin: Vs. Jenny The Teenage Robot v2?

Jenny, the Teenage Robot returns in the FNF Games category of our website right at this moment, something that makes us very excited, since her previous mod only had one song, as it was a demo, but this one is a full version, which is why it is called V2, and you've now got three amazing songs to battle her on:

Help BF take on Jenny The Teenage Robot in a man vs machine rap battle!

Whether you play this game in the story mode or free play mode, winning against your opponent is done in the same way, by reaching the end of the songs, which only happens if you play all your notes according to the charts. This means pressing the arrow keys at the moment when the identical arrow symbols above BF match one another.

Don't miss hitting those notes too many times in a row, because if that happens, you lose after one too many mistakes. Good luck we wish you, and we invite you to stick around for more fun to come, you won't regret it, ever!