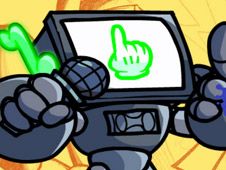 What is Friday Night Funkin’ vs ASCII_v2?

For those of you not really versed in the world of computers and programming, you should know that ASCII is a programming language quite popular and known in the world of developers, and this time that language has come to life in the form of a singing computer that has become the newest antagonist that you and Boyfriend have to face and defeat in a rhythm battle, all in this new mod called Friday Night Funkin’ vs ASCII_v2!

You can duel this character in either the story mode or free play mode, and for both of them you will do it on the following custom songs:

In case you did not know, to win the music battles you need to reach the end of the songs and have the progress bar be in your favor, which means you've played the notes at their right times in the charts.

To do so, press arrow keys to match the arrow symbols that float above BF at the same time as they match there, but know that if you miss the notes too many times in a row, you lose the game. Enjoy!