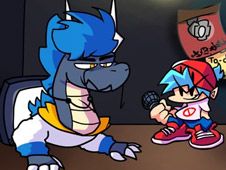 What is Friday Night Funkin Quest?

We know how much people love mythical and fantasy adventures with dragons, goblins, orcs, and other creatures of the like, which is something we have not really had in the FNF Games category of our website, but today we're going to have since we want to give you a surprise through the awesome new game called Friday Night Funkin Quest!

At this moment, the game is divided into two weeks, and for the first one you've got the songs called Convict, Wooly, and Ignition, while for Week 2 you will have only one song called Video-Out. You will definitely battle a dragon, but we will let you discover the other surprise characters from fantasy stories that will appear here.

The premise is simple: take the songs to their conclusion by hitting all their notes along the way, and making sure to not miss the beat. Tap arrow keys at the same time when arrows on the screen match one another. Of course, if you hit the wrong key, or you hit it at the wrong time, you miss a note, missing them too many times in a row means losing the game, so don't let it happen! Good luck!