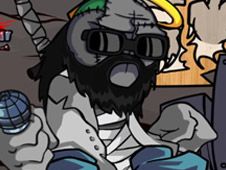 What is Friday Night Funkin vs Jeb?

For one reason or another, Boyfriend and Girlfriend were wandering the deserted wasteland, which is where they happened upon Jeb, who looks like a homeless Jesus, who has a thick beard, a halo over his head, a cross next to him, and he carries a katana over his back, while holding a microphone, because he is ready for rhythm battles all the time, just like the one, he will now have against BF, who we hope you will help win!

This full week mod comes with three awesome custom songs you will play on against Jeb:

Can Boyfriend take on and defeat The Savior?

If you've got great rhythm and timing, you will help our protagonist win, something you can do in either the story mode, where you can see dialogues between the characters, and learn more about them or simply in the free play mode. Either way, your goal is to turn the progress bar in your favor by the end of the song!

To do so you need to play the notes of the songs at the right time, something that you do use the arrow keys. How? Well, when arrow symbols that float around match above BF's head, that is when you have to press the same arrow keys on your keyboard, singing that note.

Be careful not to miss playing too many of these notes in a row, because if that happens you have to start again from scratch. Good luck!