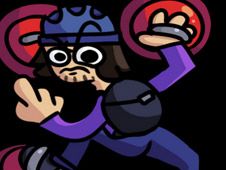 What is Friday Night Funkin vs Suction Cup Man?

One of the funniest antagonists you and BF have faced so far in our category of FNF Games online is without a doubt Suction Cup Man, a man who has suction cups attached to both his hands and feet, and even other parts of his body, and he uses them to climb on glass buildings just like Tom Cruise in Mission Impossible.

We're not so sure how they help in a music battle, but he has challenged Boyfriend, so you need to defeat him, something you do right now on the following custom songs:

To win the musical battles of this game you need to reach the end of the songs and play their notes so well that by the end the progress bar is going to be pointed towards you.

Doing that requires you to press arrow keys at the same time as arrow symbols above the BF match, but not one moment too soon or too late, since that is a miss, and making too many misses in a row means losing the game.

Now you know the rules, so nothing should be stopping you from giving this game your best right now, and maybe checking out even more games from this same category, they're worth it!