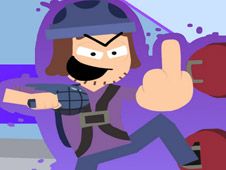 What is FNF vs Suction Cup Man v2?

Suction Cup Man, one of the funniest characters to have graced our FNF Games category so far is back, and we're very happy that in addition to his first three songs he has got two more of them, as there is a brand new week for you to enjoy right now by playing FNF vs Suction Cup Man v2 online, where you will face off against him on the following tracks:

To start off, choose between the story mode and free play mode from the main menu of the game, and, then, in either case, give it your best to reach the end of the songs by having played all their notes according to the charts. How does that work?

Well, you use arrow keys to play notes, pressing them at the same time as the identical arrow symbols above BF match one another. Be careful not to miss pressing them too many times in a row, because you end up losing the whole game.

Good luck, and, don't stop here, since we would hope to see more of you here today, where fun never stops!