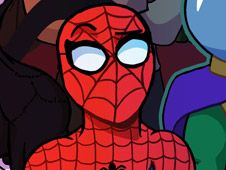 What is FNF vs Spider-Man v2?

The FNF Spider-Man V2 mod has been updated to have a total of 7 weeks, yes, SEVEN, where Boyfriend has entered the multiverse and will battle the hero, but also some of his antagonists such as Mysterio, Venom, Doc Ock, Electro, Green Goblin, and more! The tracklist is as follows:

Help BF defeat Spider-Man, his villains, and other FNF opponents!

After making your choice between the story mode and free play mode, in either case, you need to reach the end of the songs by playing their notes according to the charts in order to win. This means that when you see floating arrow symbols match above BF, you need to press the identical arrow keys at the same time.

Make sure not to miss hitting notes too many times in a row, you will lose and have to start again from scratch. Good luck, enjoy!