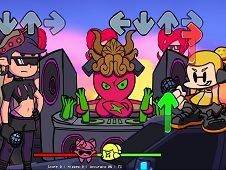 What is FNF vs Spider Dance?

Friday Night Funkin vs Spider Dance from Undertale is a new FNF Mod in which you will have to put into practice all the rap moves you learned in previous versions, because this time Spider Dance is one of the most complicated and difficult ways you've tried. Even if in this game you will meet only one week, you will have to be a professional to be able to win this mode, which makes the difficulty level of the mode to be extreme.

What is different in the new FNF vs Spider Dance Mod?

The entire graphics of the Mod are new, created from scratch, and Boyfriend looks totally different, with yellow hair, a yellow vest, black shoes and pants. What is worth mentioning is that the characters do not look like the original ones, and Girlfriend is not present in the game, but we have a new character, namely Spider, who is a DJ, puts on music and tries to make everything be as more difficult. As an opponent, you will have on the left a woman, tall, rebellious, who seems to be a fan of rock, considering the costume, the sunglasses, the earrings and her position. What you can do in this game, before the musical battle begins, is to change the difficulty levels: Easy, Normal, Hard;