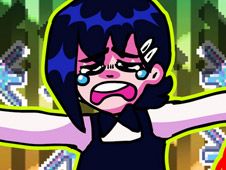 What is FNF + Chainsaw Dance vs Kobeni?

As you can obviously see right now, there are more new FNF X Anime Games for you to find and play for free on our website, and today's mod crosses over with one of the hottest manga in the world right now, which will soon also have an anime adaptation, and that is Chainsaw Man, while this week's antagonist will be Kobeni from this show.

Meet Kobeni so that you can defeat her!

Kobeni is a girl with dark hair who usually wears a suit, and she is a new recruit in the department of devil hunters from this manga, which she did when she was not serving burgers at her family's restaurant. She quickly became a fan-favorite of the fanbase, and she's now got her own rhythm game called Chainsaw Dance, and you can now help BF battle her in it.

Songs featured in this mod are called:

How to play FNF anime mods:

Help BF reach the end of the songs by hitting all the notes of the songs along the way, something you use the arrow keys for. Press them when the same arrows match above his head, but be careful not to miss too many notes consecutively, since that means losing the game and having to start again from scratch. Good luck!