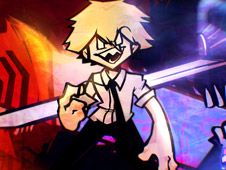 What is FNF Chainsaw vs Sword?

Chainsaw vs Sword is the new FNF mod inspired by the highly-anticipated adaptation of the Chainsaw Man anime, where the two human weapons are now going to battle it out on the song called 'Razorblade'!

It's time for an FNF battle of Chainsaw vs Sword!

You play with the character on the right, so when arrow symbols float and match above his head, that is when you press the identical arrow keys to hit your notes. Keep at it until the song concludes, but don't miss hitting the notes too many times in a row, or you have to start again from scratch. Enjoy!