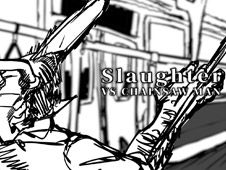 What is FNF vs Chainsaw Man?

FNF vs Chainsaw Man is a mod you should expect to arrive soon, just like the anime is going to have its premiere very soon, and right now you're in for tons of fun by going up against this anti-hero on the song called Slaughter!

Reach the song's end to win by hitting your notes according to the charts. To do it, press arrow keys at the same time as the identical arrow symbols match above BF's head but don't miss hitting the notes multiple times in a row, or you lose and have to start again from scratch. Good luck, enjoy!